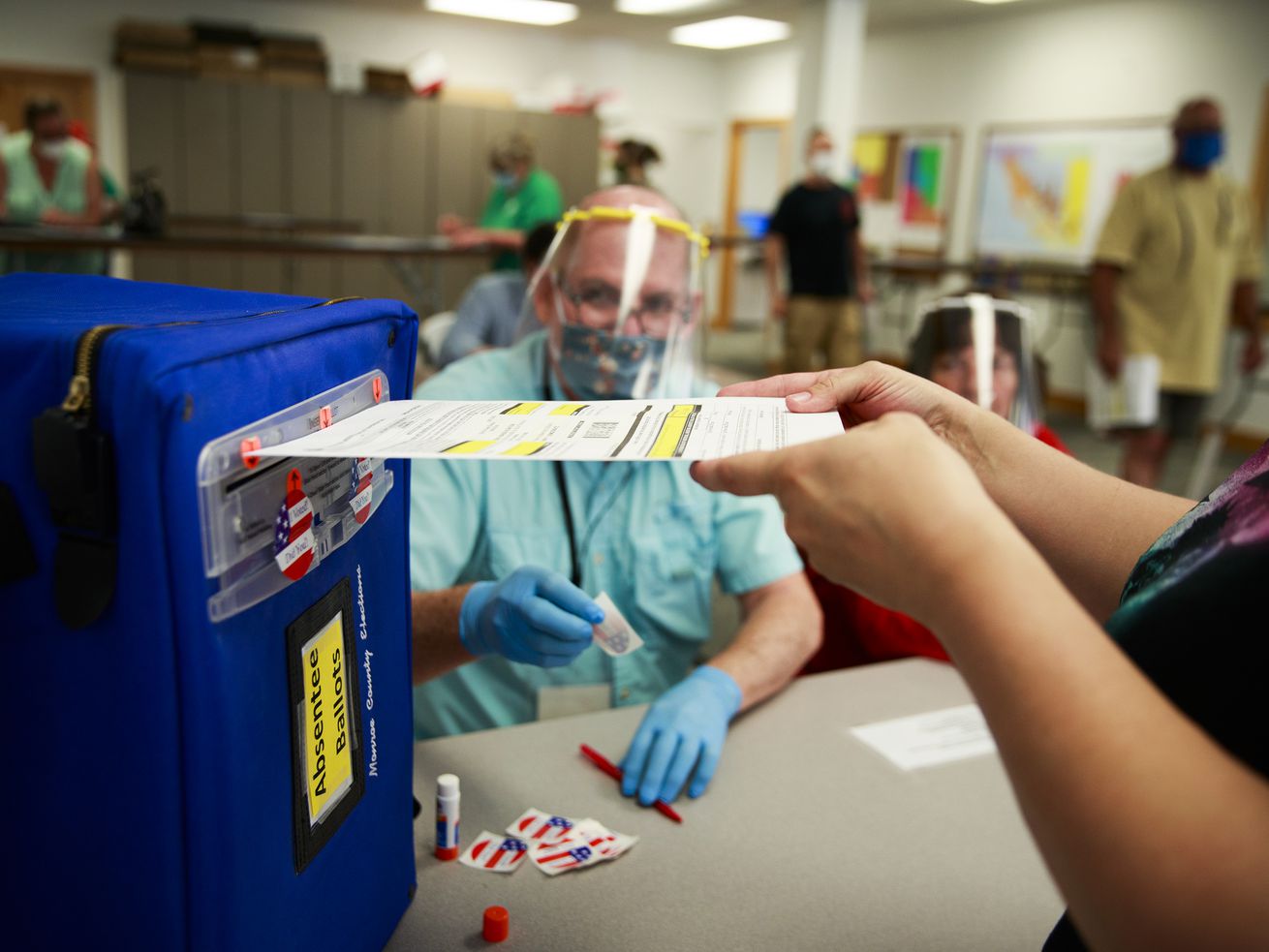 A voter casts her vote during early voting in Bloomington, Indiana on June 1. | SOPA Images/LightRocket via Getty Images

There are two massive 20-candidate races for two open congressional seats in Indiana.

Indiana’s June 2 primary elections will have essentially no bearing on the presidential race, but in two congressional districts, both Democrats and Republicans hope to capitalize on the retirements of long-serving members of the House of Representatives to flip seats held for decades by the opposite party.

In the largely Democratic 1st District, which contains much of the Chicago exurbs in the northwest area of the state, 14 Democrats and six Republicans are running to replace retiring incumbent Peter Visclosky (D-IN), who has been in office since 1984. The state’s 5th District features 15 Republicans and five Democrats competing for the seat left open by incumbent Republican Rep. Susan Brooks who decided not to run for a fifth term.

A large percentage of voters in the state’s primary — which was delayed in March due to the pandemic — are expected to vote by mail. Voters weren’t required to state a reason for requesting an absentee ballot, and state election officials reported last week that they had received over 545,935 applications to vote by mail before the May 21 deadline. That’s a dramatic increase from the mere 53,818 mail-in absentee ballots that were cast in the 2016 primary.

Polls close in Indiana at 6 p.m. Eastern, and Vox will have live results for the state’s races in partnership with Decision Desk. As they come in, here’s what you need to know about the 1st and 5th districts — two races to watch:

The 1st District hasn’t elected a Republican since 1930, and it is rated as “solid Democratic” by the Cook Political Report. But it includes all of Porter and part of LaPorte counties, both of which went for Obama in 2012 but flipped to Trump in 2016, so Republicans are hopeful they can make the race competitive this fall.

While there’s little polling for either the Democratic or Republican races, the sheer size of the 20-person field is emblematic of the once-in-a-generation opportunity offered by the retirement of a man who held the seat for 36 years.

On the Democratic side, Hammond, Indiana, mayor Thomas McDermott Jr. jumped in the race on the day Visclosky announced his retirement. Like fellow Indiana politician former South Bend Mayor Pete Buttigieg, McDermott wants to implement “Medicare for all who want it.” He’s joined by a gaggle of other candidates on the Democratic side of the ticket.

Former secretary of state candidate Jim Harper is also in the race as is state Rep. Mara Reardon. Sabrina Haake is challenging McDermott and Mrvan from the left. She is an attorney from Gary, Indiana, who supports Medicare-for-all.

McDermott has separated himself from the pack with fundraising, having brought in almost $600,000, according to FEC data, but several of his rivals, including Reardon, Mrvan, Haake, and Harper have shown the capacity to raise large amounts of fundraising dollars.

Perhaps the name that will be most familiar to voters in the six-candidate Republican race is Mark Levya, a carpenter who has been the GOP nominee in each of the last seven election cycles.

Should Levya again be the nominee, he would face a new challenger and one who does not have all the advantages of incumbency, something some of his fellow Republican candidates have stressed.

As he announced his candidacy, Spencer Lemmons, a Hammond police officer on the GOP ballot promised he would be “the fresh, forward-thinking candidate with the determination and vision Northwest Indiana has not had in decades.”

The state’s 5th District includes the Indianapolis suburbs, and it has a long history of electing Republicans, a tradition that is expected to continue in 2020. Despite that, Democrats have decided to target the race for a potential pick-up this fall.

The Republican race to replace incumbent Brooks, who is currently one of only 16 GOP women in the US House, is quite crowded, with 15 candidates running. There’s little polling of the race, so it’s hard to say who’s favored, but several big names have jumped into the race.

Most of the GOP candidates have scrambled to show support for President Donald Trump, even as they’re running to replace the more moderate Brooks. Indiana Treasurer Kelly Mitchell was once thought to be the front runner, thanks to her statewide name recognition, but the candidate, who is skilled at retail campaigning, has struggled to gain traction as the campaign season ran into the Covid-19 pandemic, according to Roll Call.

The pandemic has forced the candidates into a battle for media attention and advertising coverage, giving an advantage to state Sen. Victoria Spartz, who has raised over $800,000 as of May 13, according to FEC data. She has spent more than double anyone else. The anti-tax group Club for Growth has endorsed Spartz and subsequently thrown its financial weight behind her candidacy.

Political newcomer Beth Henderson has also gained some traction in the race, raising almost $450,000, though Club for Growth has spent money on attack ads over her previous criticism of Trump.

On the Democratic side, former state Rep. Christina Hale has outraised even Spartz, with over $1 million. Having spent only about a half-million dollars on her primary campaign in a five-way race she’s expecting to win, she could present a formidable financial challenge to whoever emerges from the GOP 15 candidate bloodbath.